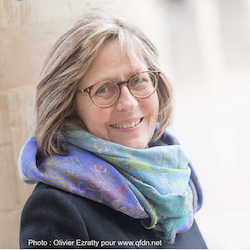 I am full-time Professor at University of Grenoble-Alps (UGA). I received my Engineering degree and Ph.D. degree from UTC (University of Technology of Compiegne) and my accreditation to Direct Research (HDR) in Computer Science from Grenoble INP. I am currently a researcher at the LIG laboratory (Grenoble Informatics Laboratory). My scientific expertise lies in the field of Cognitive and Affective computing, and mainly in the field of social Human-Robot Interaction (HRI). I participated in many national and international collaborative projects and in their scientific animation.

A major objective in the area of information technologies is to develop interactive devices that are more attractive and closer to the users and that can be considered as believable interlocutors. This leads to an increasing interest in research works on Artificial Intelligence and Affective Computing, with particular attention to social robots, virtual characters and more generally to artificial companions. Artificial companions can be defined as socially, affective and interactive believable artificial interlocutors with which the user builds a kind of life-long relationship.

Considering such issues, we intended to contribute both at the theoretical level and the application level. Thus, we have investigated the relations between emotions and communication and proposed a Multimodal Conversational Language (MCL) that allows an artificial companion to express in a expressive manner, verbal and non-verbal, and to interact in a more human-like manner. We have also defined a Cognitive and Affective Architecture (BDI-like reasoning approach integrating Emotion) to deduce the communicative intention of an artificial companion from its mental states. We also worked on the way to personalise robot’s behaviour in a particular context. We contributed on both questions of personalisation and context adaptation of companion robots. We invested the notion of style which is a psychological concept that corresponds to the mannerism used to play a particular role in a particular social context.

We implement our technologies in differents social robots and virtual characters :

We used them in experiments aimed at assessing the benefits of our approaches in terms of perceived sincerity, believability and acceptability of a companion interacting with a human user. Our main issue was social interaction between humans and artificial companions in daily life situations (guarding, playing, assistance, coaching, comforting, teaching,…).

This has led us to now focuse our research works on social robotics and Human-Robot Interaction (HRI). Robots and humans share the same open area, interact, collaborate, dialogue, and exchange physical objects or knowledge. They are brought to work, live together in everyday life situations as well as professional situations. This is the case in the context of Cobotics (collaborative robotics) in innovative industries where operators and cobots work together without protective barriers.

A key issue in cobotics is social acceptability of the cobot. Research in this field is inherently interdisciplinary (artificial intelligence, robotics, psychology, cognitive science, ergonomics) as human factors are omnipresent.